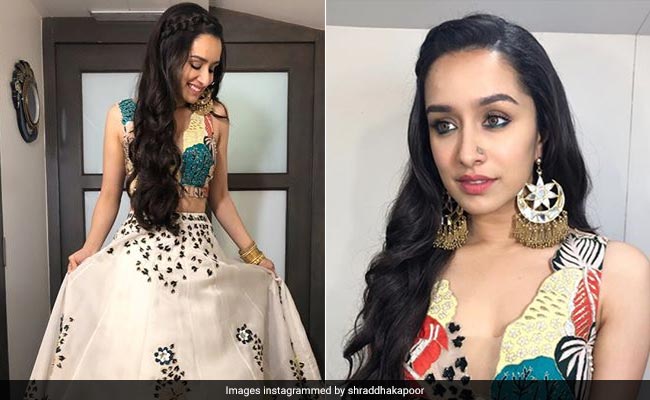 With the promotions of her upcoming movie Stree, Shraddha Kapoor has a lot on her plate. Releasing on August 31, the film is a horror-comedy based on an urban legend from Karnataka. The movie also has Rajkummar Rao and Pankaj Tripathi playing leads roles and seems like something that will do well in the box office. But for now, we are just tuned into the various promotions and the song Milegi Milegi from the movie. And speaking of promotions, guess who went a little over-the-top with one of her looks while out promoting Stree?

Shraddha Kapoor often plays around with different kinds of looks. Most of the times, it works out in her favour. However, for one of Stree‘s promotional events, Shraddha decided to wear this Aisha Rao “Forest Phantom embellished patch work lehenga in matching tulle sheer back blouse”. Great skirt, busy choli, good choice.

Now with such a busy outfit, one expects the accessorising to be minimal so that the dress becomes the centre of focus. However, Shraddha wore the outfit with a pair of statement earrings from Minerali Store; clashing massively with the dress, the earrings made everything look just too busy and over-the-top.

What’s more, she was wearing a nose pin as well. Too much, we would say.

But it isn’t like Shraddha hasn’t worn an indie look before and rocked it. For the trailer launch of Stree, the actress wore a pretty red floral set by Nikhil Thampi and paired the summery outfit with a pair of silver jhumkasand a tiny bindi. Styled to perfection.

And it looks like statement earrings are something of a personal favourite for Shraddha. Hey, no complaints there. Just as long as they are worn right. That’s the thing about statement anything, it needs to be worn with utmost care so that the whole look doesn’t seem too done up and doesn’t go overboard. Shraddha Kapoor was a cautionary tale of that fact this time.