Sony India has announced the arrival of their flagship OLED series, the A1, in India from August 4.  Sony Bravia OLED A1 comes in two sizes, 55 inches and 65 inches, although Sony had a 77-inch version of the TV on display as well, it is not being launched here for now. Regardless of what size panel you look at, the Sony Bravia A1 is a sight to behold. At the launch event, we got to spent some time with Sony’s latest 4K TV. Here are our first impressions.

Regardless of the size of the panel, the A1 series offers uniform features across the board. The Bravia A1 is a 4K HDR TV. The imaging bits are powered by Sony’s home grown X1 Extreme image processor that runs the 8 million OLEDs individually. Between the X1 Extreme and the Triluminous Engine, Sony has ensured that the A1 is able to produce the most amazing colours and contrast your eyes have ever seen. The TV is as minimal as it gets, eliminating not just bezels on all sides, but also a stand or speaker array that you would typically find on a flat screen TV. The panel is incredibly thin, measuring 86mm at its thickest. Sony wanted to remove all distractions from the front of the TV, so there’s no stand under the screen. Instead, it’s moved to the back. 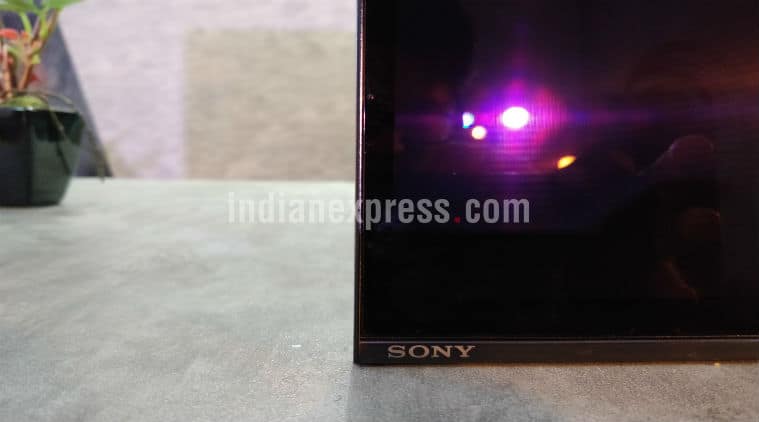 The panel is incredibly thin, measuring 86mm at its thickest.

The back of the SonyBravia OLED A1 has also received some seriously high-quality finish. The stand has a cloth grille that looks very nice, removing which reveals a sub-woofer on the top and a multitude of ports on the bottom. There is a total of 3 USB ports, 4 HDMI ports, 1 ethernet port and an optical out port in case you want to send the sound into your amp. In case you prefer your TV wall mounted, this back panel has a provision for wall mounting the TV as well. What was really nice was that Sony has built a cable management system just below the ports so that all you people who like their cables neatly laid out don’t get stressed. The fact that cabled plug in vertically into the TV is also a neat touch as this means the TV can sit as flush as possible with the wall.