Chinese manufacturer Meizu has expanded its portfolio and launched two new smartphones in China. The Meizu Pro 7 and Meizu Pro 7 Plus smartphones are priced starting at CNY 2,880 (roughly Rs. 27,400) and CNY 3,580 (roughly Rs. 34,100) respectively. Before delving into the specifications and availability, let us take a moment to talk about the smartphones’ biggest highlight – a unique second AMOLED display at the back.

Meizu hasn’t taken the LG approach and put a second screen on top of the display, just like the LG V20. Instead, it made a second screen at the back of the smartphone, for well, various purposes that Meizu thinks are essential. The second screen shows the time, notifications, weather, and also serves as a selfie screen for taking portraits from the rear camera. The small screen takes up the top left space at the back, with the dual cameras sitting on the top edge. This is quite a unique feature, not seen on any commercial smartphone launched so far, however just how it will impact the overall durability and actual user-friendliness remains to be seen.

Design wise, both the Meizu Pro 7 and Meizu Pro 7 Plus smartphones sport a slim metallic body with dual camera sensors and the second screen at the back situated on the left edge. The Home Button is in the front with a fingerprint scanner underneath, and the USB Type-C port and speaker grille are on the bottom edge of the smartphones. The power and volume keys are on the right edge, and the smartphones come with a 3.5mm audio jack as well. 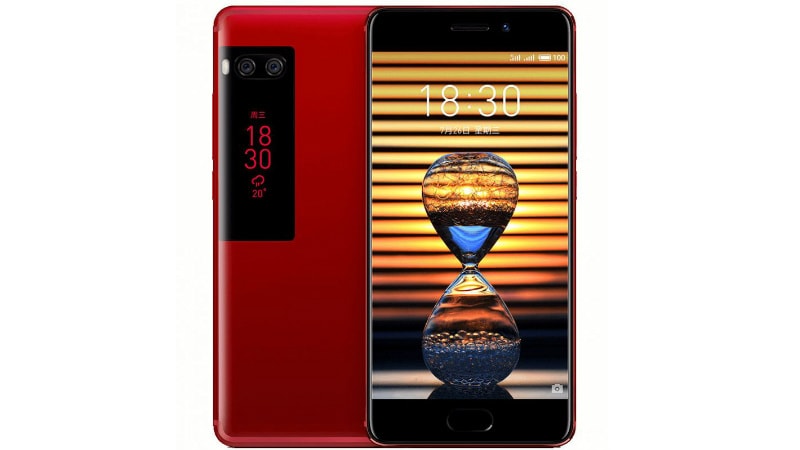 The Meizu Pro 7 runs on Flyme OS 6 based on Android 7.0 Nougat and supports dual-SIM cards. There’s a 5.2-inch full-HD (1080 x 1920 pixels) Super AMOLED display in the front and a 1.9-inch (240×536 pixels) Super AMOLED secondary display with 307ppi pixel density at the back as well. The smartphone is powered by a 2.5GHz MediaTek Helio P25 octa-core processor with Mali-T880 GPU with 64GB of internal storage offering, and has another variant that is powered by the 2.6GHz MediaTek Helio X30 deca-core 10nm processor with PowerVR 7XTP-MP4 GPU and 128GB internal storage. Both the variants pack 4GB of RAM.