The Jio Phone launch last week ended months of speculation around the handset, but the company left many question marks around the device as far as the hardware configuration is concerned. But now, information regarding the Jio Phone specifications has begun tricking out, giving us a slightly better view of what hardware the ‘free’ handset packs inside. A Jio representative has confirmed to Gadgets 360 that the Jio Phone will be a single SIM feature phone and will work on 4G VoLTE network only. The company will open beta trials for the device on August 15, while consumers will have to wait till September for wider availability. Of course, Jio Phone bookings will start on August 24, both online and offline.

The Jio Phone is a 4G-only handset and will route calls via VoLTE (Voice over LTE) technology. Notably, Jio offers the only 4G VoLTE network in the country, which means only the company’s SIM cards will work on the phone, leaving out Airtel, Vodafone, Idea, BSNL etc. out in the cold. Of course Jio rival Airtel has confirmed it will launch its VoLTE services shortly, but it’s likely that the Jio Phone will be sim-locked to the one you get from Reliance Jio.

The Jio representative, speaking on the condition of anonymity, did not say whether the company plans to release a Jio Phone variant with dual-SIM support in the future.

As the device is yet to hit the market (for beta trials or otherwise), it is not yet known what kind of hardware it packs. After the unveiling at the Reliance AGM, Qualcomm and Spreadtrum independently announced their chips are used in the first Jio-branded phone.

The Jio Phone has a 2.4-inch display with QVGA display, microSD card slot, torchlight, FM radio, and an alphanumeric keypad for input. It supports voice commands and 22 Indian languages, and has a panic button as well. A short demo of the voice command feature on Jio Phone was showcased during the keynote presentation where the device was able to play music via Jio Music.

It will also support an accessory called Jio Phone TV-Cable that allows users to connect their phones to TVs to mirror content from apps such as JioTV and JioCinema. In addition, there is provision for NFC support for digital payments, which will be rolled out to users via OTA software upgrade. 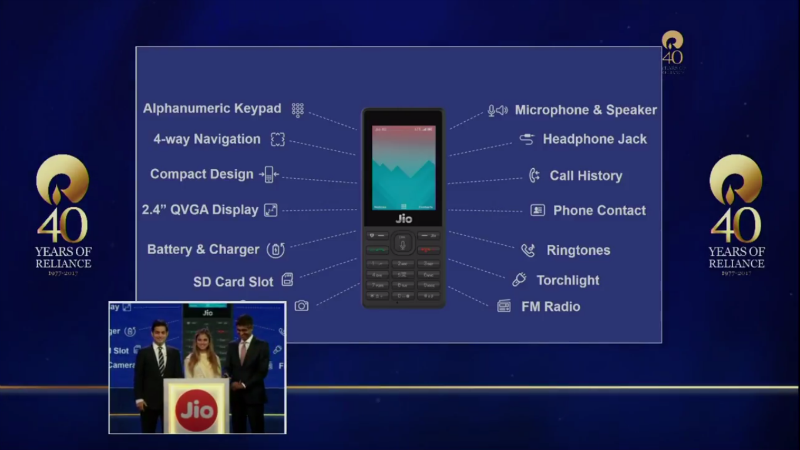 The phone does not have WhatsApp support “at the moment”, though we did catch glimpse of a Web browser, Facebook, and PM Modi’s Mann Ki Baat broadcast during the unveiling at the Reliance AGM.

For Jio Phone, the company has launched the new Rs. 153 plan, which provides unlimited data (high-speed 4G data capped at 500MB per day), free calls and SMSes, and access to Jio apps. Buyers will have to purchase the Rs. 309 recharge to connect the phone to the TV, and watch content on the big screen. There are also sachet packs priced at Rs. 24 (2-day validity), and Rs. 54 (7-day validity).

According to analysts, Reliance Jio aims to reach another 100 million users with its new feature phone; this will be in addition to the 125 million users that already use the Jio telecom network. Moreover, the 4G VoLTE-enabled feature phone will completely change the low-end phone segment and bring about a new era of innovation in this segment. On the other hand, industry body Cellular Operators Association of India (COAI) has termed the Rs. 0 pricing a clever marketing move by the company and attempt to save government levies like licence fee.