Bayern Munich manager Carlo Ancelotti does not expect to make any additional signings this pre-season and the Italian is hoping to make a successful defence of their Bundesliga title with the current squad.

The Italian has added a number of players in the last two months, including France defender Corentin Tolisso and Colombia playmaker James Rodriguez, and he admitted he was delighted with the balance of his squad ahead of the new campaign.

“I am happy with the squad and satisfied with the players we have. We can have a fantastic season,” Ancelotti told reporters in Singapore on Wednesday, a day after his side impressed in a 3-2 victory over Chelsea in a three-team pre-season tournament.

“I am happy with how we played against Chelsea, especially the performances of Tolisso and James as it seemed like they had played with us for a long time,” he added.

“They have improved really quickly and already know our style of play and are doing a good job.”
Ancelotti bristled at a second suggestion in three days that Chilean enforcer Arturo Vidal could be headed to Thursday’s opponents Inter Milan but is adopting a wait-and-watch approach towards little-used Portugal midfielder Renato Sanches.

“Anyone who thinks Vidal is leaving is wrong. He is not moving. Renato is with us all the way through pre-season and then we will make a decision. He played well against Chelsea and I hope he can continue to improve,” Ancelotti said.

Bayern’s tour of Asia has seen the club return some mixed results with a penalty shootout loss to Arsenal followed by a 4-0 thrashing by AC Milan in China, before an improved performance against the English champions in Singapore. 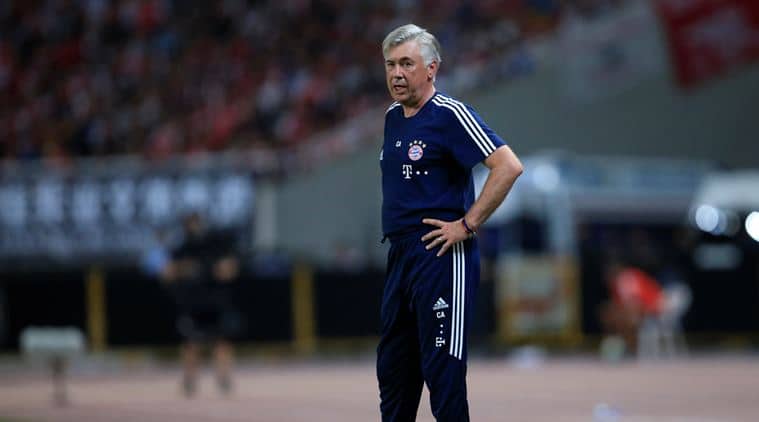 “There are good things about this tour and we could have had more players after (Arjen) Robben and (Jerome) Boateng didn’t make the trip, and we picked up a couple of injuries,” he added.

“But the games against Arsenal and Chelsea were really good, we didn’t play well against AC Milan but in the end the condition of the players has improved.

“We have one week to prepare for the German Super Cup (against Dortmund on Aug. 5) and we will not be at 100 percent like last year but we have a chance to win and we want to win.”

Bayern defender Mats Hummels agreed with his manager and was keen to focus on the positive aspects of the trip to Asia.

“We can learn a lot from this trip and have built up into good shape, which is important because we have endured tough conditions to train and play here in Asia,” he said.

“It will be much easier to run with 15 degrees Celsius less back in Germany.”