The Justice Department announced Thursday that it had shuttered an illicit Internet marketplace for drugs, firearms and fake documents in what Attorney General Jeff Sessions said was the “largest dark Web takedown in world history.”

AlphaBay was a site on the dark web where users whose identities were masked could engage in substantial buying and selling of illicit goods.

The Justice Department said that one AlphaBay staff member claimed that it serviced more than 200,000 users and 40,000 vendors, and around the time of the takedown, there were more than 250,000 listings for illegal drugs and toxic chemicals, and more than 100,000 listings for stolen and fraudulent identification documents and access devices, counterfeit goods, malware and other computer hacking tools, firearms and fraudulent services.

“This is likely one of the most important criminal investigations of this entire year,” Sessions said.

In addition to seizing AlphaBay’s infrastructure, prosecutors charged AlphaBay’s founder, Alexandre Cazes, with crimes including conspiracy to engage in racketeering and conspiracy to distribute narcotics. Cazes, 26, a Canadian citizen who had resided in Thailand, apparently killed himself while in custody in Thailand this month, the Justice Department said, and prosecutors have moved to seize his and his wife’s assets throughout the world.

While the marketplace might have been little known outside of the shadowy world of the dark web, officials said it produced real world consequences. Sessions said investigators had found instances in which drugs purchased on AlphaBay were used in overdose deaths. In one instance, Sessions said, a 13-year-old boy died after overdosing on a synthetic opioid a junior high school classmate had purchased on AlphaBay. He said investigators found 122 vendors on the site advertising fentanyl, and 238 advertising heroin.

“It’s called dark not just because these sites are intentionally hidden,” Sessions said. “It’s also dark because of what’s sold on many of them.” 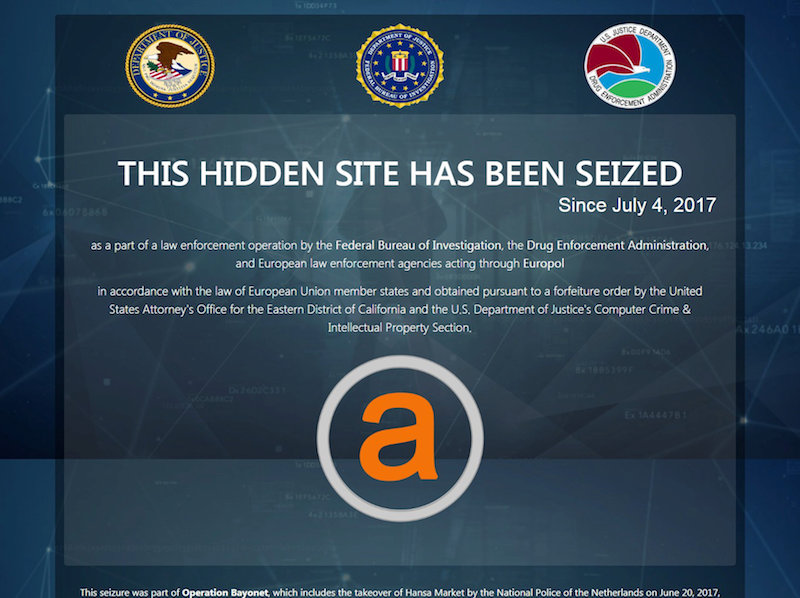 In 2013, federal authorities shut down a similar online drug marketplace called Silk Road. Its founder, Ross Ulbricht, was sentenced to life in prison in 2015. Acting FBI director Andrew McCabe said AlphaBay was roughly 10 times the size of that marketplace.

US authorities said they worked with law enforcement in several other countries – including Thailand, the Netherlands, Lithuania, Canada, the United Kingdom and France – to bring down AlphaBay. Their efforts, they said, coincided with Dutch authorities shuttering another illicit online market, known as Hansa Market.

While authorities stressed that the takedown was significant, they also acknowledged that other illicit online marketplaces would crop up or move in to take its place. US officials said they are aware of and investigating hundreds of services for secret online transactions of drugs and illicit goods.

Like AlphaBay, the services operate on the dark web – a collection of websites only accessible using specific services to help hide users’ identities.

AlphaBay operated on what is known as the Tor network, in which data accessed through a browser is passed through multiple relays, masking a user’s IP address. Transactions were conducted using digital currency, and the marketplace took a cut of the proceeds when the deals were completed.