The role that technology plays in making the world a much smaller place is truly commendable. However, owing to globalization there happens to be a prominent lack of standardization in the field of electricity. Since the national standards created in each country, the electrical standards of the technology used has not undergone much change. In case you have traveled abroad then you may have faced the problem regarding the plugs of your appliances and gadgets where they do not fit into the outlets provided oversees. The difference is not just in the shape. A major portion of the western hemisphere, including the United States use electrical systems of 110-120volts but then mostly in the other countries systems using 220-240 volts are a standard. On top of that, there is a 60Hz cycle in the 110 volt systems while most 220 volt systems operate using a cycle of 50Hz. Even though the dissimilarity in cycles per second is not a significant difference to consider, it can often make some crucial items like electrical clocks run slower or faster according to the cycle. Therefore, let us already begin with a list of things you need to carry when travelling abroad. 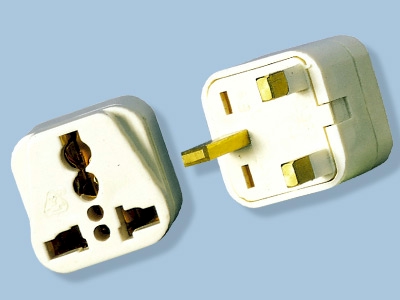 It is not uncommon to notice people using the terms interchangeably as if all the words signify one and the same thing but that is definitely not the case will be clear from the information you will get from this article.

The connector that will alter the shape of the plug in order for it to match the outlet is called an adapter. However, one important thing to know about adapters is that it will not in any way alter the voltage. If the only difference between the electrical system and the equipment that you are using is of shape, then by all means, use an adapter. If you are unsure about the differences, check your equipment. Certain items are manufactured in a way that they are able to work with both 110v and 220v. A common example of such an appliance will be your laptop power supplies. Most of them are ‘smart’ and can operate using either 110v or 220v. So all you have to do is to just get an adapter and adjust the plug to the outlet. However, wisdom is to double check with the concerned manufacturer in case you have any doubts. But if the device concerned is not dual voltage, in that case you would require to use a converter or transformer.

Living up to its name, converters take 220v from its source and cut it on and off rapidly to convert it to 110v approximately. For anything that is to be plugged in for more than quite a few minutes, converters are no good and you should definitely not use one with any electronic equipment. That if there is an electronic chip in it, a converter should not be used, is the rule of the thumb. When it comes to electronic items, one should use transformers. However, laptop power supplies mostly have this facility built in them and all you need for them is an adapter taking care of the shape of the plug.

It is to increase the electricity voltage that transformers are actually used. Converters, approximating only 110v, set a limit to the amount of electricity and this is exactly how the two are so different. In case you are stepping up to 220volt power strip from 110v, it is a transformer that you should use.